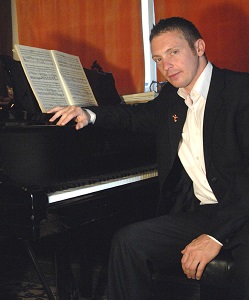 Beethoven concerto played with an interesting and impressive combination of strength and delicacy. (Review by Michael Green)

Three composers, a long programme and a big audience were the components of the last concert of the summer season of the KZN Philharmonic Orchestra, in the Playhouse, Durban.

The conductor and the solo pianist were both born in Israel and are now international figures. Daniel Boico, the man on the podium, is well known and much admired here in Durban. Daniel Gortler, the man at the keyboard, was making his first appearance with the KZNPO.

The concert opened with Modest Mussorgsky’s vivid, noisy, demonic 1867 tone poem Night on Bald Mountain, arranged by his Russian compatriot Nikolai Rimsky-Korsakov. The orchestra players were in good form here, as indeed they were throughout the evening.

Beethoven’s piano concerto No. 1 in C major (dating from 1797, it is actually the second of his five piano concertos) was played by Daniel Gortler with an interesting and impressive combination of strength and delicacy.

This was no doubt the main attraction for the audience - Beethoven’s music has unmatched drawing power - and the prolonged applause at the end indicated that they thoroughly enjoyed the performance of a pianist of calm demeanour and high skills.

He acknowledged the ovation with an encore, a lovely account of one of Mendelssohn’s 48 Songs Without Words (in 1997 he made a highly regarded CD recording of this complete collection of piano pieces).

Sergei Rachmaninoff’s Symphony No 2, written in 1908, runs for an hour and it started late, thanks to some administrative problems at the box office and in getting the audience back into their seats after the interval.

The result was that the concert ended about 40 minutes after the usual time, but nobody seemed to mind. The orchestra were given a tremendous and well-deserved ovation at the end.

Boico’s expressive and vigorous conducting style is well suited to Rachmaninoff’s music. This symphony is rather diffuse, rather long and rather repetitive, but its sweeping melodies and rich harmonies were much enjoyed by the listeners.

The six-concert winter season of the KZNPO runs from May 19 to June 23, all Thursday nights, in the Durban City Hall. - Michael Green

(To link direct to the KZN Philharmonic’s website, click on the orchestra’s banner advert on the top right hand of the page above the National Arts Festival banner)
ARTSMART at 7:30 PM
‹
›
Home
View web version