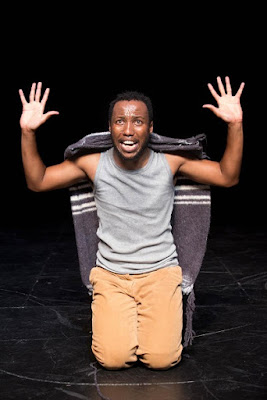 Tswalo is magnificent in its simplicity and mind-blowing in its complexities.  (Review by Kamini Govender)

The production Tswalo was recently seen at The Playhouse as part of the company’s annual New Stages Festival.

The words to describe Billy Langa’s Tswalo battle to come to the fore. The premise of Tswalo lays upon the unanswered knowledge of being; of creation, existence and its inevitable end.

The absurdity of which is cracked open through an all-encompassing exploration. From galaxies to Ancient ruins, Neanderthals to broken democracies; Langa transports the audience into different realms through his performance.

The play begins in darkness, enveloped by a powerful sound emanating from the performer. And then there was light ... Langa begins the evolutionary journey; exploring the body before we had language. When the words do begin, they are carved in lyricism and poetic imagery.

With an old blanket being his only prop; his voice and body fills the stage as he pours out each vision of (what can best be described as) everything. Weaved together by poetry and song, he takes us on a journey through space and time.

This performance stretches out to include the audience in both song and in one instance, an audience member as another character, in dance.

The use of light and darkness cleverly underlines the contrasting impetus of creation and destruction. A single blue spotlight became the inside of a womb, a slow strobe - a heartbeat. Each element of the performance was intertwined to encapsulate this infinite and limited world.

And that is what made Tswalo so poignant - the journey from beyond to the present. The sheer magic of existence compounded by the futility of greed and violence. Langa depicts the magnificence of creation; the sheer magnitude and splendour of being born. The magic of which is then undercut by being born into hunger, poverty and violence.

Tswalo is magnificent in its simplicity and mind-blowing in its complexities. It is a theatrical gift, in a world ever more attracted to CGI cinema. That one body can transport an audience through history, space and time. In its ephemerality, leave us wondering over what it meant to be there and be, well ... here. – Kamini Govender
ARTSMART at 11:52 AM
‹
›
Home
View web version