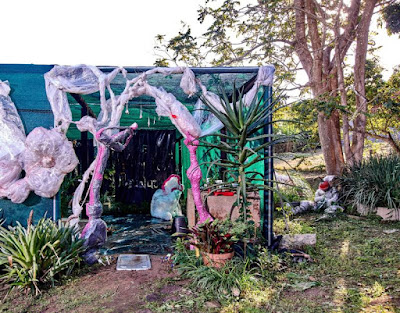 (Above: The entrance to the installation)

Dreams as R-evolution is an installation by artist Coral Bijoux which is to be found at the University of KwaZulu-Natal’s Westville campus plant nursery.

Bijoux was born and grew up in Durban. She lived in Johannesburg for about 21 years, then came back to KZN to live and work for the Wetland Park up north. She explains: “I am dedicating this phase of my life to making my art public and addressing public and very real issues that I have engaged with in my plus 31 years’ experience in many spaces across South Africa in urban, rural and township spaces...etc. etc.”

Dreams as R-evolution is an art installation in a (approximately) 50sqmetre space in a plant nursery open air/shade cloth shed with no walls or roof. Sculptural forms rendered in discarded single-use plastic, large scale drawings in oil pastel on pattern board mounted on builder’s plastic, mini-paintings in watercolour embedded in plastic, a butterfly screening room of builders and discarded plastic bags, garment rendered in found plastic spoons and photoshoot, photographs/large scale prints, drawings. This is a nine-month installation between 2019 and 2020. 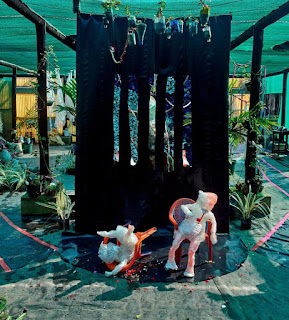 The Dreams as R-evolution installation/ Collection takes you on a journey of discovery as the artist dreams as a r-evolutionary act and presents scenarios of Being beyond the colonial and beyond the conditioning towards the unknown and known heritage; through dreaming or visioning its possibility. It becomes a form of reframing. Forming the dream through a body of artwork mostly rendered in plastic diabolical in nature that is collected from Durban’s beaches, industrial and household bins; exploring these ideas in a space bordering the Palmiet reserve, filled with insects, birds, plants, animals... and deadly snakes. The artist travels through the dream-in-the-making and re-coding the body of work. She does this visually as an ‘open’ or universal language of symbol, metaphor, imagination and re-representation. She says, “As an artist my interest in the overlapping yet interconnecting concepts of dreams as r-evolution also stem from my multiple conversations with the ‘man on the street’ who are, themselves asking the same questions, differently.”

A qualitative praxis led/based approach to Bijoux’s work with integrated auto-ethnographic writing, imagining and observation elements documents this process of ‘ordinariness’ in the heart of “seldom used shed in a plant nursery” at the bottom end of UKZN’s Westville campus. She questions our ability to transform ourselves, immersing the SELF into questions of identity, conditioning and consciousness. She ponders on a ‘conscious unconsciousness’ echoing thoughts that nullify our attempts to get beyond or outside of ‘the colonial persona’ giving consent only when we feel comfortable. To transform a SELF and thereby the world around us, is not a comfortable activity. 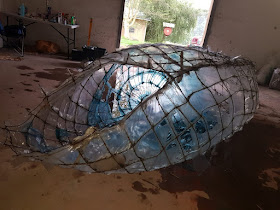 To imagine ‘a self’ that is whole and identified in authentic self-hood. A self that is neither owned and pillaged and neither is it grounded in an otherness that we have come to possess. A tricky thing to imagine a self, other than this ‘other’. Hard to imagine what we could, must have, should be, other than this otherness. A decolonised voice that cannot find its own sound or its own space or its own shape.

“To dream as a r-evolution may mean that we can get to the space on the other side of this colonial caged utterance – Coloured. Woman. Nie Blanke. Nie Swarte. Nie enige iets2. Nie mansmens. Not male. Gendered. Divorced. Single-mothered mother,” Bijoux adds.

“This body of work will question, struggle with, own, negate, affirm, refute, deconstruct, construct, reframe herself/itself, ‘the self’ to emerge as the self it wants to be. It will attempt to find through dreams/dreaming into other spaces and times and emerge with a vision for her present and future SELF that may be beyond the colonial presence. It will challenge the world view as we’ve always known it since the few hundred years past known it – to emerge with a re-created world view that takes a bit of this and a bit of that – an African world view which is sought so desperately – re-imagined and regained and evolved.”

The work is rendered primarily in discarded and used plastic collected from recycled bins, hardware stores and dumpsites, emphasizing the notion of consumer; capital(ism); waste; excess; discarded notions, discarded humanity and our ability to change damaging behaviours. The Anthropocene, notions of consciousness, revolution and evolution are explored within the context of this body of work. The large-scale installation includes various elements that unpack these concepts – from the SELF (includes a used spoon garment worn by the artist), to Authority/Power; to the space (natural and built environment); a final summation referred to as The Return to Innocence. These core ideas are represented in sculptural forms (in plastic), large drawings mounted on plastic, paintings embedded in plastic; video clips/animation and music in an inside-outside scenario. 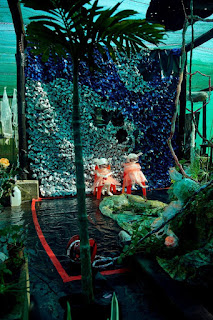 The findings in the form of this installation and its photographic documentation (by Roger Jardine), essays and creative contributions (Prof R Maart; Coral Bijoux-the artist; Malika Ndlovu; Usha Seejarim; Tracy-Lee Easthorpe; Pralini Naidoo; Andre Croucamp; Prof S Washington and his band, Ubizo; Diana Ferrus; Obakeng Thamage; Prof H Baijnath) will be published in an artbook by Print Matters Heritage and is funded by the NIHSS.

Installation assistance by Tholakele Mdakane and site support by the UKZN Westville Nursery team. The installation has been funded and supported by the National Arts Council; the HEF and ‘in kind’ by UKZN. 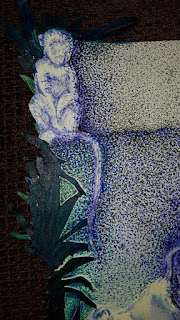