ARIEL AND JUANA LIVE AT BATCENTRE 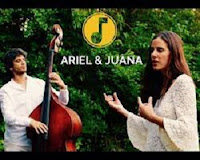 Ariel and Juana perform live at the Batcentre in Durban on January 23, 2022.

Ariel Zamosky is an Argentine bass player based in South Africa since 2005, completing his jazz studies at Tshwane University of Technology. Ariel has been an active member of the local jazz scene since 2012, having performed and recorded with prominent musicians including Nduduzo Makhathini, Afrika Makhize, Andile Yenana and toured extensively, both locally and internationally.

Juana Pires Rafael is an Argentine vocalist and composer, active in Johannesburg’s music scene since 2016 and has toured Southern Africa collaborating with many artists since. A constant creator, Juana focuses on generating new conversations exploring current issues through emotions, humour, and the Oneiric.

They will appear at the Batcentre on January 23 at 14h00 (doors open at 13h30). Capacity: 50. They are supported by Concerts SA Venue Circuit.

The Batcentre is situated at 45 Maritime Place, Small Craft Harbour in Durban.