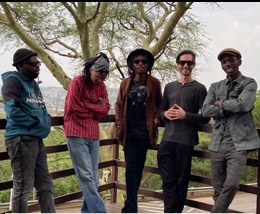 They were originally set to perform on Friday live on December 15 but the gig was postponed due to bad weather.

Bandless is an enterprising group of talented musicians. It is made up of musicians who played together in different situations and eventually formed a comradery called Bandless. Led by Hlubi Vakalisa Jele on reeds, Sibusiso (Mabulal’umthakathi) Shabalala on keys and vocal, they are joined by Eldene Bruiners on trumpet. Damien Roodt on guitar and completed by drummer/percussionist Oudskul Omello.

Although some of the group members are academically studying jazz, they offer a wide spectrum in their music varying from traditional music, house, progressive rock, hip hop etc. The group has been known for having a broad repertoire of rearranged classics and original.