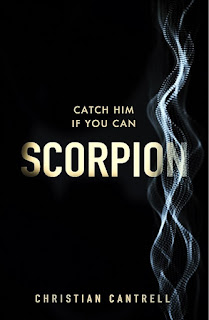 All in all, "Scorpion" is a good read if you're prepared to accept some of the more way-out aspects of the author's science fiction fantasy world. (Review by Barry Meehan)

The Large Hadron Collider, 150 metres beneath the border of France and Switzerland, is the setting for the opening scene of this "near-future" novel, Scorpion by Christian Cantrell.

Henrietta Yi and her team are thawing out data from the particle detector backlog (PDB), feeding it into a voracious Artificial Intelligence unit trained to identify quantum anomalies in the hope that the data will either certify the theory of supersymmetry, give them a glimpse of the multiverse, or even deliver an entirely new particle that will force the world to rewrite the laws of physics.

If you understood any (or all) of the above, then this science fiction novel should appeal to you, especially if you enjoy murder mysteries. If it left you stone cold or saying "Pardon?", then Scorpion is definitely not for you.

Getting away from the quantum physics element within it, the novel centres on a series of murders committed in various cities around the world, all of which have left local law enforcement scratching their heads. There is nothing by way of a victim profile to tie any of the crimes together, no similar modus operandi, and absolutely no clues left behind by a seemingly-invisible killer. The only tie-in, attracting the attention of ace CIA analyst, Quincy Mitchell, is the branding of each victim with a unique four digit number.

Quinn gets on to the murderer's trail, but soon discovers that all is not exactly as it seems. Who is involved, and why is there a strict time-scale in place, that cannot be altered? An even bigger question is Quinn's actual involvement with the killer and his victims.

All in all, Scorpion is a good read if you're prepared to accept some of the more way-out aspects of the author's science fiction fantasy world.